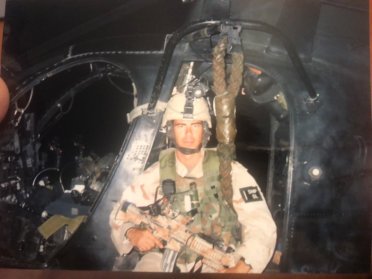 This event will focus on the battlefield impact of DoD acquisition from the vantage point of MSG (Ret) Eric Stebner and his 17 hour Battle of Robert’s Ridge where 7 service members died and he received the Silver Star for valor.

Most importantly, this is your opportunity to engage with a military member that has an amazing story to tell and understand why our work is critical to the war fighter!

Our target audience includes those who work with the DoD and those who appreciate the sacrifices our service members make. We promise an event that is like a blockbuster movie and touches every listener’s heart and soul!

Eric Stebner: While serving in the 75th Ranger Regiment, MSG Stebner worked in several acquisition positions which enabled his transition to retirement and into the position of Sniper Project Officer at the Army’s Maneuver Center of Excellence. Eric now works for Flyer Defense a company that designs and engineers the “Flyer 72” [GMV 1.1] which is a current program of record vehicle for the United States Special Operations Command. Flyer Defense is also in an open competition for the Army’s next Infantry Squad Vehicle. Eric dedicates his personal time and energy as the President of 4VR RIP; a non-profit that restores classic vehicles for family members that were left behind by military and first responders killed or wounded in action.

The Battle of Roberts’ Ridge was a short but intense military engagement between United States special operations forces and al-Qaeda insurgents fought in March 2002, atop Takur Ghar mountain in Afghanistan. For the U.S. side, the battle proved the deadliest entanglement of Operation Anaconda, an effort early in the War in Afghanistan to rout al-Qaeda forces from the Shahi-Kot Valley and Arma Mountains. The battle saw three helicopter landings by the U.S. on the mountain top, each greeted by direct assault from al-Qaeda forces. Although Takur Ghar was eventually taken, seven U.S. service members were killed and many wounded. The battle is named so after the first casualty of the battle, Navy SEAL Neil C. Roberts.

TSgt John Chapman would die during battle. His family would not receive the Medal of Honor for his acts of valor until August 22, 2018. This would be significant milestone for the United States Air Force as he would become the first AF service member to service the Medal of Honor since the war in Vietnam.