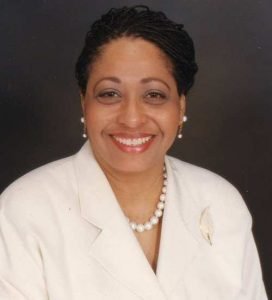 Before Ms. Jones joined Port Electronics Corp., she served in the U.S. Air Force and is a Vietnam Era Veteran, worked for a government contractor that supported NASA during the time of its first space shuttle launch, helped improved IT security for military bases in Massachusetts, and partnered with other IT professionals to launch several businesses, including Dnutch Associates of Methuen, MA.

Ms. Jones and Dnutch earned the prestigious Massachusetts Small Business Association 2014 Women-Owned Small Business of the Year award. In addition in September 2014, Dnutch was awarded a United States patent, “System and Method for Collision Detection Avoidance during Packet Based Communications.”   In 2015, Ms Jones received a national award by MBE Magazine “WBE Who Rocks”.

When she is not in Washington, DC working with clients, Methuen, MA working at Dnutch or in Salem, New Hampshire at Port Electronics Corp., Ms. Jones makes sure to give back to causes and communities that are important to her.  She is a member of the Greater Boston Section of National Council of Negro Women.  Ms. Jones supports fundraisers for scholarships for local high school students, and also works as a mentor for struggling mothers in Cambridge.  She assists the Community Brotherhood and the Community Minority Culture Center in Lynn, Massachusetts and is a member of the Southern New England Chapter of the Armed Forces Communications and Electronic Association (AFCEA).