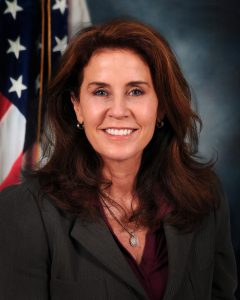 MaryJo “MJ” Thomas is Director of Security at General Dynamics Bath Iron Works. She is responsible for overseeing all BIW Security functions including counterintelligence, cyber, industrial and physical plant security programs. She manages day-to-day activities and ensures compliance with all programmatic, regulatory, legal and contractual requirements for these areas. She has extensive experience in matters concerning national security and the protection of defense weapons and technology, with specific expertise in crisis and change management and investigative leadership.

Ms. Thomas spent much of her professional career with the Federal Bureau of Investigation. Her most recent assignment was as FBI Senior Advisor to the Department of Defense for the FBI National Security branch. She was the primary interface between the FBI and the Office of Secretary Defense on national security issues which involved the FBI and she coordinated counterintelligence, counterterrorism, cyber and weapons of mass destruction matters between the two agencies. Her previous roles include Section Chief of the Counterproliferation Center in the FBI’s Counterintelligence Division.

Ms. Thomas joined the FBI as a special agent in 2000 after serving as a law enforcement officer in Rhode Island. Ms. Thomas also has served as a Security Forces Officer and Logistician in the Air Force, active duty and reserve. She earned a bachelor’s degree from Providence College, graduated from the Rhode Island Municipal Police Training Academy and the Academy of Military Science.